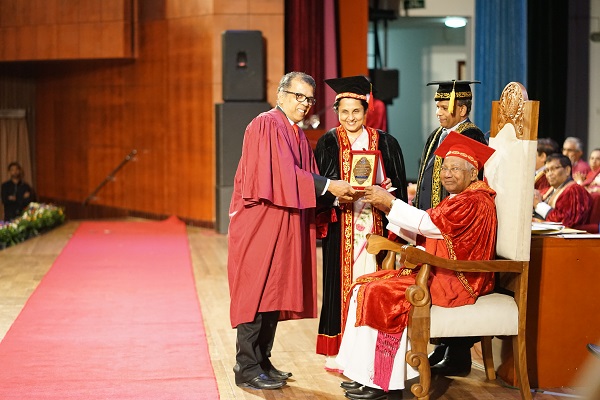 Dr. G.D.S.P. Wimalaratne of UCSC won the Vice Chancellors Award of Research Excellence at 2018 Postgraduate Convocation of University of Colombo which was held on 5th and 6th December 2019 at at the Bandaranaike Memorial International Conference Hall.

Dr Galpayage Don Susantha Prasad Wimalaratne obtained his BSc Special (Hons) in Computer Science from the University of Colombo with first class honours, securing the Mohan Munasinghe award for Computer Science in 1994. He holds a PhD from University of Salford in UK, specializing in Virtual Environments. His PhD research has 6 citations in US patents by Boeing, Siemens and Cannon. Dr Wimalaratne is a Senior Member of Institute of Electrical and Electronics Engineers (USA) and a member of Computer Society of Sri Lanka.

He has made research contributions to the fields of Computer Graphics and Simulations, Assistive Technology, Mobile Computing, and Secure Software Systems. He has over 100 research publications which include 9 Web of Science Indexed journals since 2016. At National level, he has edited ICT Textbooks from grades 6 to 11 and, several Teacher Guides in ICT which are published by the Ministry of Education. He has also served the Department of Examinations as a resource person.

He has won the Presidential Awards for Research in 2016, ICT Researcher of the Year award by the Computer Society of Sri Lanka in 2019, University of Colombo Senate Award for Research Excellence in both 2016 and 2017. He was awarded Student of the Year by the Computer Society of Sri Lanka in 1994. He has co-authored several conference
papers which have won the best paper awards. Among the many undergraduate projects, he supervised, 9 projects have won awards at the international and national level. He has served as a principal investigator and co-investigator in the research projects funded by IDRC, JICA and NRC.

Dr Wimalaratne has served as the Head of the Department of Communication and Media Technologies, as well as the Head of Post Graduate Programmes at UCSC since 2015. He has also served as the Director, Career Guidance Unit of the University of Colombo from 2005 to 2011.

He has been a member of the Advisory Council of National Archives Department, member of Academic Affairs Board of National Institute of Education.