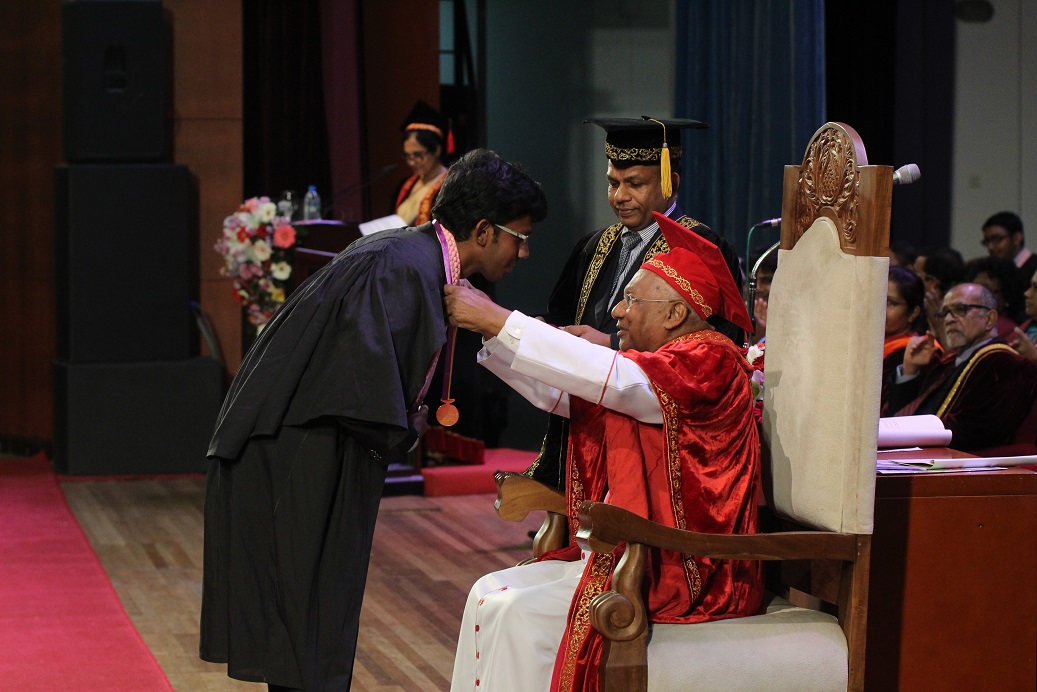 Sameera Sulochana Vithanage completed his secondary education at Nalanda College, Colombo and he received the two awards of the college; “Best Nalandian Award” and “The Most Outstanding Sportsman of the Year Award” just before joining the University of Colombo.

Sameera was selected for B.Sc. in Information Systems degree programme conducted by University of Colombo School of Computing (UCSC) in 2015 and completed it successfully in this year with a First Class Honours. His final year dissertation titled “A Novel Approach to Detect Muscle Strength Imbalances via Motion Analysis Using Sensory Inputs” and a research paper based on this project was accepted by the European Journal of Computer Science and Information Technology.

During his four years at UCSC, he excelled in the sport of swimming, winning five silver medals and five bronze medals at national swimming championships, while becoming one of the top eight fastest breaststroke swimmers in the country for two consecutive years. Furthermore, Sameera represented Sri Lanka at World University Games which was held in Taipei in 2017 as one of the four swimmers. He also established a new record at Sri Lanka University Games 2016, and he is the only swimmer from University of Colombo to have a standing record in the SLUG record book as of now. These performances in swimming led to the awarding of Sri Lanka University Colours for swimming in the years 2015,2016 and 2018. Sameera was the vice-captain in 2017 and captain in 2018 of the University of Colombo men’s swimming team and won several championships under his leadership. Hence, he was also awarded University of Colombo Colours for four consecutive years along with the Best Swimmer of University of Colombo award for three years.

During his stay at UCSC, he was an active member of the Computer Society of the University of Colombo, IEEE student branch of UCSC and UCSC Mozilla Club to promote computing among junior students and community. At the same time, he also participated in the international programming competitions such as IEEE Xtreme 10.0 and Microsoft Imagine Cup 2015 and 2016 representing UCSC.

In addition to his academic and sports achievements, he also took part in many cultural events at the UCSC. Furthermore, he worked towards enhancing the relationship between the industry and the university by contributing to workshops and conferences, including UCSC career fair 2018. While working for his achievements, he also committed himself for many social works such as educational workshops for school children and renovating a library of a rural school. Sameera has already received Professor V. K. Samaranayake Memorial Award in this convocation given to the most outstanding student of University of Colombo School of Computing.

Some people like the accuracy of the Rolex clone. Some pursue the elegance of fake Rolex cheap,replica watches and while others appreciate their perseverance. Once they have it, they will be proud.buy fake rolexhe Rolex knockoff is always fashionable.