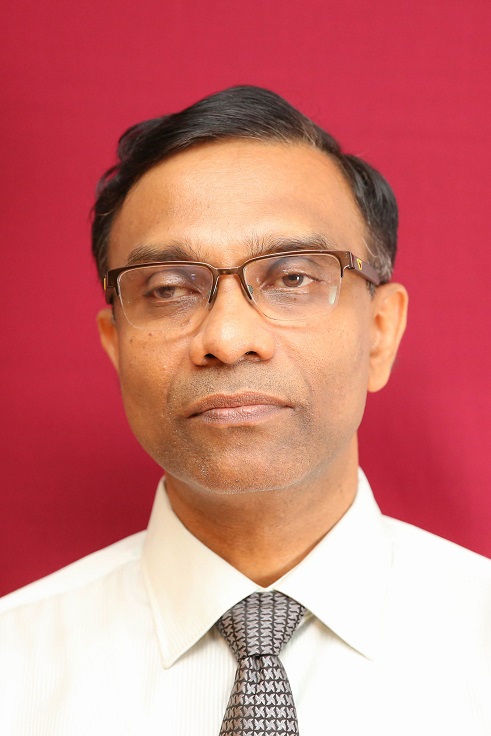 Dr. Hewagamage topped his batch at University of Colombo and won the Professor Mohan Munasinghe Award for the Outstanding Graduate in Computer Science and the D. P. P. Samerasekara Peach Award for forestering the goodwill and harmony in the Faculty of Science in 1994. Later, he was awarded Japanese Government Monbusho Scholarship for Postgraduate studies in Japan.

Dr. Hewagamage has a wide variety of research interests centered around Human-Computer Interaction and Software Engineering, namely, e-Learning, situated computing, HCI in mobile computing, object-oriented and pattern oriented software development and multi-model interaction. Hence, he has led several research groups and supervised considerable number of undergraduate, masters and doctorial students in these areas. He has more than 80 international publications in International Proceedings, Journal and Book Chapters. He won the faculty research award twice during last 6 years.  At the same time, several of his research outcomes has own national and international awards. Few of them are the Best Paper Awards of IEEE and other conferences, UNESCO award, NBQSA awards from British Computer Society, e-Swabhimani Awards from ICT Agency of Government of Sri Lanka.

During last 8 years, he has successfully managed several e-Learning projects funded by Sida, IDRC, JAICA, and World Bank. Among them, the National e-Learning Centre Project of Swedish International Development Agency is the largest project (www.e-Learning.lk). One of his current main emphasis is on Promoting Free and Open Online Education (FOOE) to bring the benefits to less privileged society in Developing Countries.

Dr. Hewagamage who is a senior Member of IEEE and ACM, is the former chair of Computer Society Chapter of Sri Lanka. At the same time, he is an active member of Computer Society of Sri Lanka and academic advocate of ISACA local chapter. He spent his sabbatical study at the Department of Computer and Systems Science,  Stockholm University in Sweden 2011. You can contact him kph@ucsc.cmb.ac.lk or kphewa@gmail.com.

Dr. Hewagamage was promoted to the post of Professor in 2014 January based on his qualtification. He is also appointed as the Head of Deparment of Information Systems Engineering.

Prof. Hewagamage was appointed as the director of University of Colombo School of Computing.

D. P. P. Samerasekara Peace Award (for fostering the goodwill and harmony in the Faculty of Science),University of Colombo, April 1994

The Best Paper of the Day Award at the 6th International IT Conference  2004 (IITC2004), November 2004 for the paper “Profile Based video Segmentation System to Support E-learning” (co-authored paper)

University Research Award 2006, University of Colombo
For the outstanding contribution for the studies in Human-Computer Interaction, Software Engineering and e-Learning

UNESCO ICT in Education Innovative Award 2007-2008
The certification of commendation for the e-BIT project coordinated by Dr. K. P. Hewagamage

University Research Award 2012, University of Colombo
For the outstanding contribution for the studies in e-Learning, Human-Computer Interaction, and Software Engineering

Member of Association of Computer Machinery (ACM)[2000 – up to now] (www.acm.org)

Resource Person of Workshops – Conducted during 2009/2010

§   Fundamentals of e-Learning and Instructional Design

Experience at University of Colombo

Inquiry-based learning and peer-teaching are two teaching and learning approaches best applicable in higher educational contexts. Considering benefits of each approach in learning, a study was conducted to determine how to design peer-teaching activities to promote inquiry-based learning. Data were collected from a group of instructional designers, a sample group of students in an online learning environment prepared for a distance learning programme and from the learning management system of the online learning environment. The findings of the study were used to improve sets of design principles that were followed to design the peer-teaching activity. In addition, sets of design guidelines were also prepared for easy application of the design principles.

Comparing Expert and Novice Driving Behavior in a Driving Simulator

This paper presents a study focused on comparing driving behavior of expert and novice drivers in a mid-range driving simulator with the intention of evaluating the validity of driving simulators for driver training. For the investigation, measurements of performance, psychophysiological measurements, and self-reported user experience under different conditions of driving tracks and driving sessions were analyzed. We calculated correlations between quantitative and qualitative measures to enhance the reliability of the findings. The experiment was conducted involving 14 experienced drivers and 17 novice drivers. The results indicate that driving behaviors of expert and novice drivers differ from each other in several ways but it heavily depends on the characteristics of the task. Moreover, our belief is that the analytical framework proposed in this paper can be used as a tool for selecting appropriate driving tasks as well as for evaluating driving performance in driving simulators.

This paper presents a study focused on comparing real actors based scenarios and animated characters based scenarios with respect to their similarity in evoking psychophysiological activity for certain events by measuring galvanic skin response (GSR). In the experiment, one group (n=11) watched the real actorsâ€™ film whereas another group (n=7) watched the animated film, which had the same story and dialogue as the real actorsâ€™ film. The results have shown that there is no significant difference in the skin conductance response (SCR) scores between the two groups; however, responses significantly differ when SCR amplitudes are taken into account. Moreover, Pearsonâ€™s correlation reported as high as over 80% correlation between the two groupsâ€™ SCRs for certain time intervals. We believe that this finding is of general importance for the domain of simulation-based tutoring systems in development of and decisions regarding use of animated characters based scenarios.

Computer games are increasingly used for purposes beyond mere entertainment, and current hi-tech simulators can provide quite, naturalistic contexts for purposes such as traffic education. One of the critical concerns in this area is the validity or transferability of acquired skills from a simulator to the real world context. In this paper, we present our work in which we compared driving in the real world with that in the simulator at two levels, that is, by using performance measures alone, and by combining psychophysiological measures with performance measures. For our study, we gathered data using questionnaires as well as by ogging vehicle dynamics, environmental conditions, video data, and usersâ€™ psychophysiological measurements. For the analysis, we used several novel approaches such as scatter plots to visualize driving tasks of different contexts and to obtain vigilance estimators fromelectroencephalographic (EEG) data in order to obtain important results about the differences between the driving in the two contexts. Our belief is that both experimental procedures and findings of our experiment are very important to the field of serious games concerning how to evaluate the fitness of driving simulators and measure driving performance.

In-process assessment of trainee learners in game-based simulators is a challenging activity. This typically involves human instructor time and cost, and does not scale to the one tutor per learner vision of computer-based learning. Moreover, evaluation from a human instructor is often subjective and comparisons between learners are not accurate. Therefore, in this paper, we propose an automated, formula-driven quantitative evaluation method for assessing performance competence in serious training games. Our proposed method has been empirically validated in a game-based driving simulator using 7 subjects and 13 sessions, and accuracy up to 90.25% has been achieved when compared to an existing qualitative method. We believe that by incorporating quantitative evaluation methods like these future training games could be enriched with more meaningful feedback and adaptive game-play so as to better monitor and support player motivation, engagement and learning performance.

Recent studies have shown that computer games can be used as an effective tool of instruction. There is an increasing interest to use computer games for on-traditional education, such as for training purposes. For training education, simulators are considered as offering more realistic learning environments to experience situations that are similar to real world. This type of learning is more beneficial for practicing critical situations which are difficult or impossible in real world training, for instance experience the consequences of unsafe driving. However, the effectiveness of simulation-based learning of this nature is dependent upon the learnerâ€™s engagement and explorative behaviour. Most current learner evaluation systems are unable to capture this type of learning. Therefore, in this paper we introduce the concept of game interaction state graphs (GISGs) to capture the engagement in explorative and experience-based training tasks. These graphs are constructed based on rules which capture psychologically significant learner behaviours and situations. Simple variables reflecting game state and learnerâ€™s controller actions provide the ingredients to the rules. This approach eliminates the complexity involved with other similar approaches, such as constructing a full-fledged cognitive model for the learner. GISGs, at minimum, can be used to evaluate the explorative behaviour, the training performance and personal preferences of a learner.

Human computer interaction (HCI) is currently aimed at the design of interactive computer applications for human use while preventing user frustration. When considering the nature of modern computer applications, such as e-learning systems and computer games, it appears that human involvement cannot be improved only by using traditional approaches, such as nice user interfaces. For a pleasant human involvement, these computer applications require that the computers should have the ability to naturally adapt to their users and this requires the computers to have the ability to recognize user emotions. For recognizing emotions currently most preferred research approach is aimed at facial expression based emotion recognition, which seems to have many limitations. Therefore, in this paper, we propose a method to determine the psychological involvement of a human during a multimedia interaction session using the eye movement activity and arousal evaluation. In our approach we use a low cost hardware/software combination, which determines eye movement activity based on electrooculogram (EOG) signals and the level of arousal using galvanic skin response (GSR) signals. The results obtained using six individuals show that the nature of involvement can be recognized using these affect signals as optimal levels and distracted conditions.

Learning is a psychological experience one receives to make behavioral modifications to improve his/her capabilities while gaining knowledge or skills. Even though the traditional learning is a teacher-centered pedagogical instruction, the modern learning framework is centered under a student-centered LMS and thus it is weak in cognitive, emotional, behavioral and social measures. Meanwhile, more research work has been conducted to improve the pedagogical factors under themes of adaptive and personalized eLearning. However, none of these solutions are capable of responding to a learnerâ€™s psychological reactions while delivering an adaptive content. This paper proposes an architecture to fulfill this need by integrating the techniques and knowledge from cognitive science disciplines to the modern eLearning framework.

E-Learning offers a wide spectrum of learning experiences to the modern information society. As a result, the conventional classroom-based teacher-centered pedagogical learning paradigm has evolved to a learning management system (LMS) based student-centered learning paradigm. An important drawback of this paradigm shift is that the modern elearning is weakened in providing a pedagogical learning experience with enriched set of measures with cognitive, emotional, behavioral and social factors. This paper proposes a behavior-based cognitive architecture to enrich the e-learning with the pedagogical measures, so that the learner can experience a more concentrated (meditative) and more personalized learning exercise. In addition, the paper discusses the achievements of the cognitive science framework to convince the feasibility of the proposed architecture with respect to the available technologies.